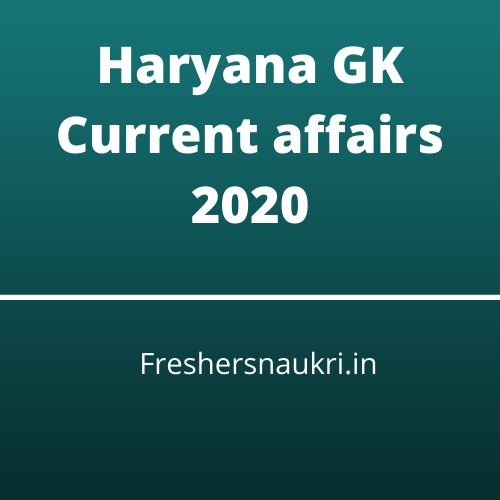 Haryana GK Current affairs 2020: Haryana Current General Knowledge with Haryana Current Affairs in Hindi for HSSC and HPSC Exams. Question were asked in every state Exam from these topics.

Bahudhhanyaka
Haryana was known as Bahudhannyaka or the land of “plentiful grains’ during the Mahabharata age.

2. The 1200 MW Rajiv Gandhi Thermal Power Project is located in which among the following districts of Haryana?
[A]Hissar
[B]Fatehabad
[C]Sirsa
[D]Faridabad

Khedar, Hissar
The two units of 1200 MW Rajiv Gandhi Thermal Power Project at Khedar, Hisar were commissioned in April, 2010 and October, 2010 in a record period
of 38 months and 44 months respectively

Rastriya Krishi Vikas Yojana
A unique programme of ‘Banjh Mukt Pashudhan’ recently launched will also be a continued feature in the year 2011-12 under RKVY, in which rural youth
after training, will provide A.I. services to the livestock at the farmers’ door steps

Birds
Kalesar National Park is a protected area located in eastern Haryana, India, 150 km from Chandigarh. It is a popular destination for bird-watching. It is
home to the red jungle fowl among other birds. It is a sal forest in Shivalik Hills, a name given to the foot-hills of the Himalayas is spread across 11,000
acres (45 km2)

6. Who among the following are eligible for the land plots in Haryana under Mahatma Gandhi Gramin Basti Yojna?
[A]SCs
[B]BCs
[C]BPL families
[D]All of above

All of above
Mahatma Gandhi Gramin Basti Yojna is the flagship programme of the State Government under which free residential plots of 100 sq. yards each are
allotted to eligible SCs, BCs(A) and BPL families.

Rs. 31000
To honour the girl child and ensure that she is not a burden to the parents it is befitting that the girls from relatively poor (BPL, Scheduled Castes families
and daughters of widows) are married gracefully. For this mission, under the “Indira Gandhi Priyadarshini Vivah Shagun Yojana” a grant of Rs. 15000/-
was being given by the Haryana Govt. to BPL persons belonging to scheduled Castes/Denotified tribes/ Tapriwas Jatis (and also widows of all the
sections of society) and Rs. 5100/- was being given to the persons of other sections of the society. This grant has been enhanced to Rs. 31000/- and
Rs. 11000/- respectively from 26th January, 2010. During the year 2010-11, from 16th December, 2010 a grant of Rs. 31000/- will also be given to all the
destitute girls living in Govt. / Aided NGOs/ institutions on the occasion of their marriage.

8. Which among the following two cities of Haryana were established by Firoz Shah Tughlaq?
[A]Hissar and Ballabhgarh
[B]Hissar and Faridabad
[C]Hissar and Fatehabad
[D]Kaithal and Hissar

Hissar and Fatehabad
Firoz Shah was also a remarkable builder. He had a passion of founding and naming the towns. When his son Fatah Khan was born on his march to
Delhi, he founded a town at the site of the happy event as Fatahabad (now in Haryana). During his Bengal campaign he renamed two towns and founded
Jaunapur, in honor of his late cousin. He established second Firozabad on the banks of Yamuna River near Delhi. Here he established one of the Asokan
Pillars which he had removed from its original places. He also founded a city of Hissar-i-Firoza in the modern Haryana which is now the town of Hisar.

9. Mithatal which is also known as “Eastern Domain” of the Indus, or Harappan, Civilization, is located in which among the following districts of Haryana?
[A]Kaithal
[B]Bhiwani
[C]Haryana
[D]Panipat

10. A nuclear power plant at Gorakhpur village is coming up in Haryana in which among the following districts?
[A]Sirsa
[B]Fatehabad
[C]Faridabad
[D]Ambala

Fatehabad
The nuclear power plant would be of 2,800 MW capacity, and four units of 700 MW each would be established in this plant. The land for the plant is being
acquired from three villages: Gorakhpur, Baropal and Kajalheri. Haryana would get 65 per cent of the electricity generated by the plant.